In this study, a new hybrid model integrated adaptive neuro fuzzy inference system with Firefly Optimization algorithm (ANFIS-FFA), is proposed for forecasting monthly rainfall with one-month lead time. The proposed ANFIS-FFA model is compared with standard ANFIS model, achieved using predictor-predictand data from the Pahang river catchment located in the Malaysian Peninsular. To develop the predictive models, a total of fifteen years of data were selected, split into nine years for training and six years for testing the accuracy of the proposed ANFIS-FFA model. To attain optimal models, several input combinations of antecedents’ rainfall data were used as predictor variables with sixteen different model combination considered for rainfall prediction. The performances of ANFIS-FFA models were evaluated using five statistical indices: the coefficient of determination (R 2 ), Nash-Sutcliffe efficiency (NSE), Willmott’s Index (WI), root mean square error (RMSE) and mean absolute error (MAE). The results attained show that, the ANFIS-FFA model performed better than the standard ANFIS model, with high values of R 2 , NSE and WI and low values of RMSE and MAE. In test phase, the monthly rainfall predictions using ANFIS-FFA yielded R 2 , NSE and WI of about 0.999, 0.998 and 0.999, respectively, while the RMSE and MAE values were found to be about 0.272 mm and 0.133 mm, respectively. It was also evident that the performances of the ANFIS-FFA and ANFIS models were very much governed by the input data size where the ANFIS-FFA model resulted in an increase in the value of R 2 , NSE and WI from 0.463, 0.207 and 0.548, using only one antecedent month of data as an input (t-1), to almost 0.999, 0.998 and 0.999, respectively, using five antecedent months of predictor data (t-1, t-2, t-3, t-6, t-12, t-24). We ascertain that the ANFIS-FFA is a prudent modelling approach that could be adopted for the simulation of monthly rainfall in the present study region. 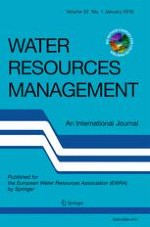 Erratum to: Long-Term Quantification of Stream-Aquifer Exchange in a Variably-Saturated Heterogeneous Environment