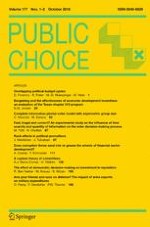 The effect of democratic decision-making on investment in reputation

Does corruption throw sand into or grease the wheels of financial sector development?

Fast, frugal and correct? An experimental study on the influence of time scarcity and quantity of information on the voter decision making process

Bargaining and the effectiveness of economic development incentives: an evaluation of the Texas chapter 313 program

A capture theory of committees