We compare the two duality theories of rank-metric codes proposed by Delsarte and Gabidulin, proving that the former generalizes the latter. We also give an elementary proof of MacWilliams identities for the general case of Delsarte rank-metric codes. The identities which we derive are very easy to handle, and allow us to re-establish in a very concise way the main results of the theory of rank-metric codes first proved by Delsarte employing association schemes and regular semilattices. We also show that our identities imply as a corollary the original MacWilliams identities established by Delsarte. We describe how the minimum and maximum rank of a rank-metric code relate to the minimum and maximum rank of the dual code, giving some bounds and characterizing the codes attaining them. Then we study optimal anticodes in the rank metric, describing them in terms of optimal codes (namely, MRD codes). In particular, we prove that the dual of an optimal anticode is an optimal anticode. Finally, as an application of our results to a classical problem in enumerative combinatorics, we derive both a recursive and an explicit formula for the number of \(k \times m\) matrices over a finite field with given rank and \(h\)-trace. 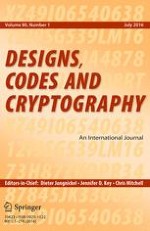 On constructions and parameters of symmetric configurations

A general check digit system based on finite groups