In their theory of social constructions of target populations, Schneider and Ingram argue that in degenerative policy systems policy designs and policy outcomes will disproportionately benefit those socially constructed as Advantaged and disproportionately harm those socially constructed as Deviants (1997). Though heretofore unexamined, an implication of Schneider and Ingram’s model presented in Policy Design for Democracy (1997) is that the effects of policy with widespread outcomes should be rankable with respect to targets’ social constructions, with Advantaged receiving less than Contenders who receive less than Dependents who receive less than Deviants of bad outcomes, and vice versa for good outcomes. Air pollution policies affect members of all four types of socially constructed groups, air pollution is well known to have social justice components, and air pollution is of particular interest because of its seeming universal application. So we performed an empirical, quantitative analysis of this rank-order hypothesis using data on air pollution in cities in California’s Central Valley. The analysis finds evidence that social constructions of subpopulations in Central Valley cities help to explain the incidence of air pollution in the hypothesized rank-order way. The results provide new evidence of the value of the Schneider and Ingram (Policy design for democracy. University Press of Kansas, Lawrence, 1997) model in the area of outcomes, and new evidence regarding the social justice of seemingly universal policies. 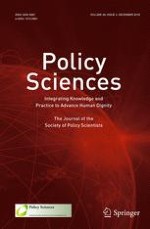 Thick narratives and the persistence of institutions: using the Q methodology to analyse IWRM reforms around the Yellow River

Appeals to evidence for the resolution of wicked problems: the origins and mechanisms of evidentiary bias

How to build models for government: criteria driving model acceptance in policymaking