Dublin Core descriptors capture metadata in most repositories, and this includes recent repositories dedicated to datasets. DC descriptors are generic and are being adapted to the requirements of different communities with the so-called Dublin Core Application Profiles that rely on the agreement within user communities, taking into account their evolving needs. In this paper, we propose an automated process to help curators and users discover the descriptors that best suit the needs of a specific research group in the task of describing and depositing datasets. Our approach is supported on Dendro, a prototype research data management platform, where an experimental method is used to rank and present DC Terms descriptors to the users based on their usage patterns. User interaction is recorded and used to score descriptors. In a controlled experiment, we gathered the interactions of two groups as they used Dendro to describe datasets from selected sources. One of the groups viewed descriptors according to the ranking, while the other had the same list of descriptors throughout the experiment. Preliminary results show that (1) some DC Terms are filled in more often than others, with different distribution in the two groups, (2) descriptors in higher ranks were increasingly accepted by users in detriment of manual selection, (3) users were satisfied with the performance of the platform, and (4) the quality of description was not hindered by descriptor ranking. 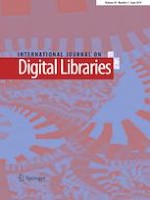 Discovering the structure and impact of the digital library evaluation domain

Benchmarking and evaluating the interpretation of bibliographic records