Organizations are increasingly using electronic surveillance to observe their employees’ behavior. This controversial practice has yet-unknown effects on employee behavior or attitudes. We seek to examine the effects of electronic surveillance on contextual performance, drawing from the perspective of psychological reactance theory. Data were collected from employees of a variety of organizations (n = 238). Respondents indicated the ways their organizations used electronic surveillance and described their reactions using open-ended comments, and then completed measures of state and trait reactance, organizational citizenship behavior (OCB), and counterproductive work behavior (CWB). Invasion of privacy was linked with state reactance. Anger, one component of state reactance, was associated with increased CWB-O and decreased OCB-O. Further, not only did trait reactance predict invasion of privacy perceptions, but it also explained significant variance in CWB and OCB. After controlling for trait reactance, anger was no longer a significant predictor of these outcomes. This study provides evidence that perceptions of monitoring systems affect contextual performance and that individual differences affect reactions to surveillance. This knowledge can be used to inform the design, implementation, and communication of monitoring systems. This study contributes to the electronic monitoring and reactance literatures by being the first to link invasion of privacy, trait and state reactance, and contextual performance. People experience state reactance in response to invasion of privacy; this suggests that psychological reactance theory can be used to inform the design of monitoring systems. We provide evidence that surveillance is associated with negative consequences. 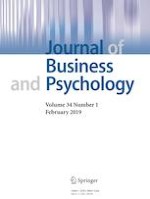 HARKing: How Badly Can Cherry-Picking and Question Trolling Produce Bias in Published Results?

Unpacking the Role of a Telecommuter’s Job in Their Performance: Examining Job Complexity, Problem Solving, Interdependence, and Social Support

Tell Me Sweet Little Lies: How Does Faking in Interviews Affect Interview Scores and Interview Validity?