The reactivity ratios of styrene (STY) and 2-ethylhexyl acrylate (EHA) synthesized by bulk copolymerization method, were determined by ordinary least square (OLS) and generalized least square (GLS) approaches according to Inverted Finemann - Ross (IFR), Yezrielev - Brokhina - Roskin (YBR), Kelen - Tüdős (KT) methods. Composition results were summarized and the 95 % individual confidence limits were determined and compared with each other and Error - in - Variables - Model (EVM) approach. Based on the copolymer compositions, the calculated reactivity ratios of STY and EHA through the GLS approach show acceptable percentage deviation with the well-known EVM method, which proves GLS approach, is the best linear estimator program for determining the monomer reactivity ratios. The reactivity ratios of EHA and STY are equal to 0.292 and 0.980 in IFR technique through the generalized least squares (GLS) approach which is closer to the point estimated from Error-in-variables model (EVM) and also r EHA and r STY are equal to 0.292 and 0.979 in EVM method, respectively. The present paper shows an estimation integral method for investigating the reactivity ratios of styrene and 2-ethylhexyl acrylate in Eviews software and the estimated values are discussed in terms of two regression approaches and compared with EVM method. 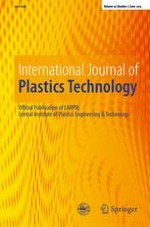 Effect of compatibilizer on the morphology development, static and dynamic mechanical properties of polymer-polymer composites from LDPE and PET