In this paper, we argue that, under a specific set of circumstances, designing and employing certain kinds of virtual reality (VR) experiences can be unethical. After a general discussion of simulations and their ethical context, we begin our argument by distinguishing between the experiences generated by different media (text, film, computer game simulation, and VR simulation), and argue that VR experiences offer an unprecedented degree of what we call “perspectival fidelity” that prior modes of simulation lack. Additionally, we argue that when VR experiences couple this perspectival fidelity with what we call “context realism,” VR experiences have the ability to produce “virtually real experiences.” We claim that virtually real experiences generate ethical issues for VR technologies that are unique to the medium. Because subjects of these experiences treat them as if they were real, a higher degree of ethical scrutiny should be applied to any VR scenario with the potential to generate virtually real experiences. To mitigate this unique moral hazard, we propose and defend what we call “The Equivalence Principle.” This principle states that “if it would be wrong to allow subjects to have a certain experience in reality, then it would be wrong to allow subjects to have that experience in a virtually real setting.” We argue that such a principle, although limited in scope, should be part of the risk analysis conducted by any Institutional Review Boards, psychologists, empirically oriented philosophers, or game designers who are using VR technology in their work. 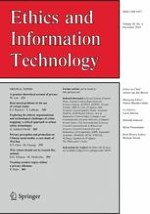 Privacy perception and protection on Chinese social media: a case study of WeChat