Over the last two decades, online advertising has become one of the most important elements of corporate communications. Whereas static banner ads dominated initially, search advertising (Varian 2007) now encompasses the largest part of global online advertising spending. In recent years, a new form of online advertising, real-time advertising 1 (RTA), has been increasingly used. RTA is based on auctions in which individual advertising spaces are sold within a few milliseconds after calling a website. Advertisers or their media agencies participate in these auctions. RTA was first established in the U.S. and is now represented in the German market, with a market share of approximately 10 % (BVDW 2013). RTA will progressively replace the traditional forms of purchasing online advertising space, which nowadays is being sold in large quotas and at predetermined prices that are mediated by marketers and media agencies. Thus, from the perspective of publishers, RTA allows both a reduction of transaction costs and an increase in revenues due to higher utilization. Advertisers can target ads based on the product affinity of user groups, which allows for the optimization of advertising campaigns in a short period of time (Ghosh et al. 2009). …
Anzeige
Vorheriger Artikel Interview with Stefan Wrobel on “Applied Big Data Research”
Nächster Artikel BISE – Call for Papers Issue 1/2016 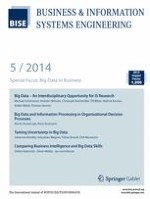