Emissions were measured from seven heavy-duty (HD) on-road vehicles that were operated along six common route types used for freight transport in California. All vehicles had engines that were certified to the 0.01 g/bhp-h particulate matter (PM) and either a 0.2, 0.3, or 2.3 g/bhp-h nitrogen oxide (NOx) standard. Diesel vehicles had low carbon monoxide (CO) and total hydrocarbon (THC) emissions below brake-specific standards, with route averages ranging from 0.24 to 3.35 g CO/mi and from 0.02 to 0.45 g THC/mi. Diesel vehicles equipped with selective catalytic reduction (SCR) had route average NOx emissions ranging from 0.58 to 3.99 g/mi (0.16 to 0.96 g/bhp-h). NOx emissions were less route-dependent for the one vehicle with a 12-L compressed natural gas (CNG) engine and three-way catalyst (TWC), with route averages ranging from 0.16 to 0.46 g/mi (0.06 to 0.13 g/bhp-h). The ranking of certification NOx emissions for the seven engines reported during engine-dynamometer-based certification was not maintained during real-world testing; for example, highway driving NOx emissions were lower than certification values for some engine families and higher than certification values for others. Route-average gravimetric particulate matter (PM) emissions ranged from 4 to 12 mg/mi, which on a brake-specific basis were at least two times below the 0.01 g/bhp-h standard. Ion speciation of PM emissions indicated that the most prevalent species were sulfate (SO4 2−) for the model year (MY) 2007 diesel vehicle equipped with a diesel particulate filter (DPF) and no SCR, nitrate (NO3 −) for conventional diesel vehicles with a DPF and SCR, and sodium (Na+) was the most abundant species for the CNG vehicle. NOx and PM emissions were compared to, and show generally good agreement with, the latest California mobile source model (EMFAC2014). 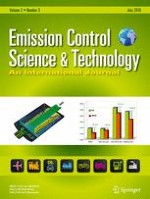 Formation of Urea-Based Deposits in an Exhaust System: Numerical Predictions and Experimental Observations on a Hot Gas Test Bench

Characterizing Diesel Particulate Filter Failure During Commercial Fleet Use due to Pinholes, Melting, Cracking, and Fouling