Reconciling Environmental and Flood Control Goals on an Arid-Zone River: Case Study of the Limitrophe Region of the Lower Colorado River in the United States and Mexico | springerprofessional.de Skip to main content
TOOLBAR 1 2 3 4
SUCHE MENÜ 1 2 3 4

Arid zone rivers have highly variable flow rates, and flood control projects are needed to protect adjacent property from flood damage. On the other hand, riparian corridors provide important wildlife habitat, especially for birds, and riparian vegetation is adapted to the natural variability in flows on these rivers. While environmental and flood control goals might appear to be at odds, we show that both goals can be accommodated in the Limitrophe Region (the shared border between the United States and Mexico) on the Lower Colorado River. In 1999, the International Boundary and Water Commission proposed a routine maintenance project to clear vegetation and create a pilot channel within the Limitrophe Region to improve flow capacity and delineate the border. In 2000, however, Minute 306 to the international water treaty was adopted, which calls for consideration of environmental effects of IBWC actions. We conducted vegetation and bird surveys within the Limitrophe and found that this river segment is unusually rich in native cottonwood and willow trees, marsh habitat, and resident and migratory birds compared to flow-regulated segments of river. A flood-frequency analysis showed that the existing levee system can easily contain a 100 year flood even if vegetation is not removed, and the existing braided channel system has greater carrying capacity than the proposed pilot channel. 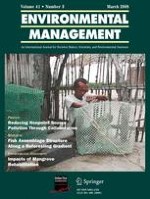 Land Claims and Comanagement of Protected Areas in South Africa: Exploring the Challenges

Grouping Lakes for Water Quality Assessment and Monitoring: The Roles of Regionalization and Spatial Scale