Dissimilar Al/Mg alloys were joined by refill friction stir spot welding (RFSSW) in this work. The effect of sleeve plunge depth on microstructure and mechanical properties of the joints was studied. The results showed that sound joint can be obtained at sleeve plunge depth of 2.4 mm. Intermetallic compounds (IMCs) layer, formed by the liquid eutectic phase, were observed at both the sleeve-affected zone and joint center. The IMC at the pin-affected zone was thicker than that at the sleeve-affected zone because of its flow characteristic. Less liquid eutectic phase formed during RFSSW when joint using Mg as the upper sheet because the oxide layer on the Al sheet was hard to break, resulting to thinner IMC layer. The maximum load of 3.6 kN was obtained at 2.6 mm when the Al alloys served as the upper sheet, and the maximum failure of 3.6 kN was also obtained at 2.4 mm when the Mg alloys served as the upper sheet. The RFSSW joint presented shear fracture mode. The XRD patterns showed that the IMC of Al3Mg2 and Al12Mg17 formed inside the joint. 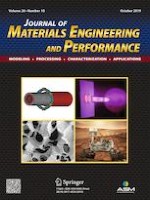 Effect of Prestrain on the Fatigue Life of Superelastic Nitinol