Surface control additives (SCAs), or surfactants, can obstruct the wetting of liquid films on lyophilic surfaces even though they lower surface tension. In this work, this unusual behavior was used to decrease the widths of printed organic and nanoparticle lines on different homogeneous surfaces. A decrease in line width accompanied a change in its cross section. The ability of a SCA to decrease the line width was correlated with contact angle but not the surface tension of the solution. Line refinement was consequently attributed to an increase in contact angle. Because there were no reports that surfactants increased contact angles, the mechanisms to increase contact angle were discussed in static and dynamic terms. First, Owens and Wendt’s theory revealed that contact angle changes depended on SCA-induced modification of polar and dispersive interfacial components. However, a definitive increase in contact angle could not be deduced from this theory alone. Second, the effect of solutal Marangoni forces induced by the SCAs on contact angle was discussed by considering the wetting behaviors of binary solvents. SCA concentration dependence of surface tension at higher than the initial SCA concentration correlated well with the ability of the SCA to decrease line width. 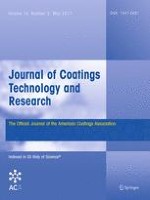