A principal-value integral in wavenumber appears in the description of water waves generated by a wavemaker in wave tank. Its integrand is highly oscillatory and has a pole at the prescribed wavenumber associated with the oscillation frequency of wavemaker. Our analysis starts with transforming the wavenumber integral into two canonic integrals by changing the integral variable. The canonic integrals are then studied in three complex planes. Three contour integrals along appropriate steepest descent paths yield several components including residues’ contribution and integral terms. By regrouping integral terms according to their integrand, a new formulation is derived and composed of an explicit steady-state component, an explicit initial component, and two integrals. The wavefront component in integral form is analysed and expressed in a close form involving the complementary error function. The local component is further expressed as the sum of an asymptotic term and remaining integral which is well suited for numerical computations. Numerical results confirm that the new formulation gives exactly the same as the original one but in a much more efficient and accurate way. Furthermore, the new formulation providing explicit expressions of different components and could be used to reveal insightful features of transient waves. 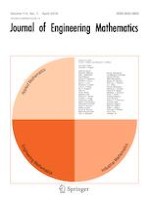 A macroscopic traffic model based on driver physiological response

The control of intensity peak dynamics for paraxial waves