By solving a nonlinear complementarity problem for the consistency condition, an improved implicit stress return iterative algorithm for a generalized over-nonlocal strain softening plasticity was proposed, and the consistent tangent matrix was obtained. The proposed algorithm was embodied into existing finite element codes, and it enables the nonlocal regularization of ill-posed boundary value problem caused by the pressure independent and dependent strain softening plasticity. The algorithm was verified by the numerical modeling of strain localization in a plane strain compression test. The results showed that a fast convergence can be achieved and the mesh-dependency caused by strain softening can be effectively eliminated. The influences of hardening modulus and material characteristic length on the simulation were obtained. The proposed algorithm was further used in the simulations of the bearing capacity of a strip footing; the results are mesh-independent, and the progressive failure process of the soil was well captured. 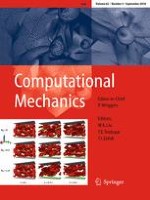