Bionanocomposites of hydroxypropyl cellulose (HPC) and nanofibrillated cellulose (NFC) were prepared by solution casting. The various NFC were in form of powders and were prepared from refined, bleached beech pulp (RBP) by mechanical disintegration, optionally combined with a pre- or post mechanical carboxymethylation. Dynamic mechanical analysis (DMA) and tensile tests were performed to compare the reinforcing effects of the NFC powders to those of their never-dried analogues. For unmodified NFC powders an inferior reinforcing potential in HPC was observed that was ascribed to severe hornification and reagglomeration of NFC. In contrast, the composites with carboxymethylated NFC showed similar behaviors, regardless of the NFC suspensions being dried or not prior to composite preparation. SEM characterization confirmed a homogeneous dispersion of dried, carboxymethylated NFC within the HPC matrix. These results clearly demonstrate that drying of carboxymethylated NFC to a powder does not decrease its reinforcing potential in (bio)nanocomposites. 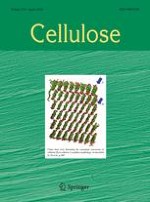