This study estimates the macroeconomic impact of remittances and some control variables such as openness of the economy, capital/labor ratio, and economic freedom on the economic growth of African, Asian, and Latin American-Caribbean countries using newly developed panel unit-root tests, cointegration tests, and Panel Fully Modified OLS (PFMOLS). We use annual panel data from 1985–2007for 64 countries consisting of 29 from Africa, 14 from Asia, and 21 from Latin America and the Caribbean region, respectively. We find that remittances, openness of the economy, and capital labor ratio have positive and significant effect on economic growth for all regions as a group and in each of the three in study. While the economic freedom index also has a positive and significant effect on growth in Africa and Latin America, however, its effect on the economic growth of Asia is mixed. 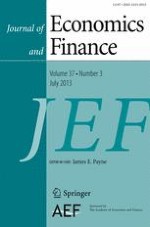 Myopia and pensions in general equilibrium

Carry-trades on the yen and the Swiss franc: are they different?

FDI activity and worker compensation: evidence from US non-manufacturing industries

Broadcast meteorology and the supply of weather forecasts: an exploration

The influence of ETFs on the price discovery of gold, silver and oil