A study was conducted concerning the preparation and application of a novel synthetic oxide adsorbent of MgO-SiO2 type. The material was prepared via a sol–gel route, utilizing magnesium ethoxide and tetraethoxysilane as precursors of magnesium oxide and silica respectively, and ammonia as a catalyst. The powder was comprehensively analyzed with regard to chemical composition (EDS method), crystalline structure, morphology, characteristic functional groups, electrokinetic stability and porous structure parameters (BET and BJH models). The synthesized oxide adsorbent is amorphous, with irregularly shaped particles, a relatively large surface area of 612 m2/g, and negative surface charge over almost the whole pH range. Comprehensive adsorption studies were performed to investigate the adsorption of Cd(II) and Pb(II) ions on the MgO–SiO2 oxide adsorbent, including evaluation of adsorption kinetics and isotherms, the effect of pH, contact time and mass of adsorbent. It was shown that irrespective of the conditions of the adsorption process, the synthesized MgO–SiO2 adsorbent exhibits slightly better affinity to lead(II) than to cadmium(II) ions (sorption capacity of 102.02 mg(Pb2+)/g and 94.05 mg(Cd2+)/g). The optimal time for removal of the analyzed metal ions was 60 min, although adsorption reached equilibrium within 10 min for Pb(II) and within 15 min for Cd(II) ions, which was found to fit well with a type 1 pseudo-second-order kinetic model. Additionally, adsorption efficiency was affected by the pH of the reaction system—better results were obtained for pH ≥7 irrespective of the type of metal ion. 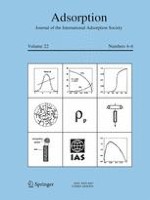