We investigated the influences of natal-pool and metamorph characteristics on juvenile survival, age-specific breeding probabilities, and dispersal of wood frogs (Lithobates sylvatica) and used this information to infer how life history strategies of short-lived species may offset risks associated with breeding in highly variable habitats. We used multistate mark-recapture data from eight wood frog populations in Maryland, USA, to investigate the influences of natal-pond and metamorph characteristics on post-metamorphic demographics. We found that post-metamorphic juvenile survival was highly variable and negatively influenced by abiotic conditions experienced during development but showed little relationship to larval density or size at metamorphosis. Estimates of recruitment and dispersal probabilities indicated that males mature earlier than females, and a small percentage of each sex disperse to non-natal pools. Survival probabilities for adults during the non-breeding season were less variable than juvenile rates, lower for females, and negatively related to mean monthly precipitation. Survival of adults during the breeding season was generally very high. We provide the first robust estimates of post-metamorphic vital rates of wood frogs that allow for variation in capture probabilities. We found little evidence for an effect of metamorph traits on juvenile survival, suggesting that wood frogs may be able to overcome initial disadvantages to have similar post-metamorphic performance. Our study suggests that variation in the age of maturity for wood frogs may mitigate risks associated with breeding in a highly variable habitat to maximize lifetime fitness without increasing lifespan, and this strategy is minimally affected by carry-over effects from the larval stage. 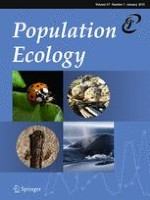 Modelling harvesting strategies for the lobster fishery in northern Europe: the importance of protecting egg-bearing females

Variations in the population structure and ecology of Matteuccia struthiopteris