This article shows an application of a new algorithm, called kidney algorithm, for reservoir operation which employs three different operators, namely filtration, secretion, and excretion that lead to faster convergence and more accurate solutions. The kidney algorithm (KA) was used for generating the optimal operation of a reservoir namely; Aydoghmoush dam in eastern Azerbaijan province in Iran whose purpose was to decrease irrigation deficit downstream of the dam. Results from the algorithm were compared with those by other evolutionary algorithms, including bat (BA), genetic (GA), particle swarm (PSO), shark (SA), and weed algorithms (WA). The results showed that the kidney algorithm provided the best performance against the other evolutionary algorithms. For example, the computational time for the KA was 3 s, 2 s, 4 s, 6 s and 3 s less than BA, SA, GA PSA and WA, respectively. Also, the objective function for the optimization problem was the minimization of the irrigation deficits and its value for the KA was 55%, 28%, 52%, 44 and 54% less than GA, SA, WA, BA and PSA, respectively. Also, the different performance indexes showed the superiority of the KA compared to the other algorithms. For example, the root mean square error for the KA was 74%, 61%, 68%, 33 and 54% less than GA, SA, WA, BA and PSA, respectively. Different multi criteria decision models were used to select the best models. The results showed that the KA achieved the first rank for the optimization problem and thus, it shows a high potential to be applied for different problems in the field of water resources management. 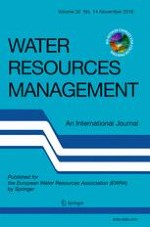