Strength training is an aspect of gait rehabilitation, which complements balance control and weight-bearing training. However, conventional strength training does not show positive gait outcomes, due to lack of task specificity. Therefore, the aims of this study were to investigate the effects of a resistance force applied at the center of mass (CoM) and to investigate whether this exercise can be used for effective task-specific gait training. Using a novel robotic walker, a consistent resistive force was applied to the CoM of subjects in the posterior direction. Eleven healthy subjects were instructed to walk under five walking conditions with increasing forces, based on each subject’s body weight (BW), at 0, 2.5, 5, 7.5, and 10% BW. Joint kinematics and mean amplitude and frequency of electromyography signals from nine major muscles were measured. The application of resistance resulted in significantly increased flexion angles at ankle, knee, and hip joints. A large amount of motor unit activation with lower firing rates was found at knee and hip joints, indicating that this type of resistance training can improve muscular strength and endurance in a task-specific manner. The long-term effects of the resistance training on neurologically challenged patients will be investigated in the future. 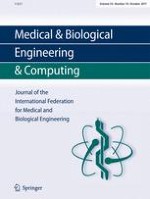