Aggregation of resources in space, spectrum, and so on, is the fundamental idea behind many technology building blocks of 5G networks, such as massive multi-input multi-output and carrier aggregation, among others. In this respect, another important dimension for parallelism is the aggregation of diverse radio access technologies (RATs), such as WiFi, LTE, and 5G, in heterogeneous networks (HetRAT networks). Simultaneous multiple RAT connectivity facilitates both users and network operators in achieving even higher data rates and in balancing the traffic load, respectively. In this paper, we review the technological supports for the realization of the multi-RAT connectivity and focus on a general framework for resource allocation in HetRAT systems. Specifically, a distributed algorithm is proposed to allocate, with minimal overhead signaling, the bandwidths of available RATs among users considering both the system operator’s objective and the users’ demands and constraints. The optimality of the proposed distributed algorithm is further proved, and its convergence is investigated. Finally a test case is introduced in which users are power constrained and the system operator enforces capacity limits and motivates users for a fair load balancing over RATs. Numerical results shows the efficiency of the proposed algorithm and its fast convergence in few iterations. 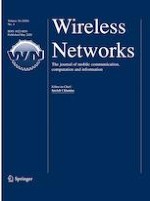