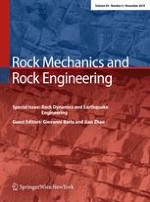 The Town Effect: Dynamic Interaction between a Group of Structures and Waves in the Ground

Micromechanical Modelling of Stress Waves in Rock and Rock Fractures