Urban trees contribute to the regulation of microclimates of cities through transpirational cooling. The main environmental factors determining transpiration are evaporative demand and soil water availability. However, growth conditions in urban areas are often unfavorable and may promote drought stress. The responses of trees to these conditions may vary between species and age classes, and in addition, can be modified by their environment. For a better understanding of water use patterns of urban tree species, these responses were investigated as a function of different meteorological and soil conditions of their urban environments. To identify physiological responses of mature oaks (Quercus robur L.) to contrasting site conditions, sap flow measurements were carried out in two consecutive growing seasons (2013 and 2014) in urban and suburban areas of Hamburg, Germany. Even considering the varying and sometimes challenging local soil and meteorological conditions, the oaks showed predominantly uniform response patterns. At all study sites, sap flow dynamics were characterized by saturation responses to increasing vapor pressure deficits during both daytime and nighttime conditions, reflecting stomatal responsiveness and hence, a stomatal down-regulation of water loss at demanding atmospheric conditions. Accordingly, the water use of oak trees was characterized by an isohydric strategy, which can help to avoid the risk of cavitation. Moreover, the maximum values of nighttime sap flow exceeded 20% of the daily total at all sites, indicating high rates of nocturnal transpiration and thus a relevant cooling effect during the night. Actual sap flow followed potential sap flow at all sites despite decreasing soil water potentials in the upper soil layers. This suggests actual sap flow during both growing seasons was only limited by atmospheric water demand. Accordingly, the studied mature oak trees maintained high rates of transpiration even in times of reduced soil water availability and thus could provide cooling under challenging site conditions. In contrast to suburban areas, however, oaks in the urban site showed reduced absolute sap flow rates, indicating transpiration sensitivity to different situations of water demand and supply. Due to its water use strategy and its ability to cope with moderate drought, Q. robur can be considered a suitable urban tree species in view of current and future demanding urban growth conditions. 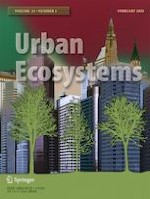