Uranium-6 wt pct niobium (14 at pct niobium) displays the shape memory effect (SME), where deformation proceeds by twinning and twin rearrangement via boundary migration within the SME regime. In-situ neutron diffraction during deformation suggests that after SME strain is exhausted, deformation proceeds via another twinning mechanism that does not recover to the original parent orientation upon reheating and transformation. Here we show from in-situ tensile and compressive loading and unloading experiments that early post-SME twins partially reverse during unloading, which is evident by rapid texture evolution, and this reversion is responsible for the inelastic portion of the previously reported ~ 2 pct strain recovery. 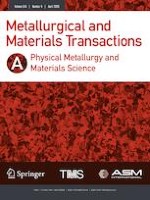 Mechanism of Zn Coating on the Wettability, Spreadability, and Microstructure of Al/Steel with the Laser Welding–Brazing Method