Modal transition systems are a popular semantic underpinning of interface theories, such as Nyman et al.’s IOMTS and Bauer et al.’s MIO, which facilitate component-based reasoning for concurrent systems. Our interface theory MIA repaired a compositional flaw of IOMTS-refinement and introduced a conjunction operator. In this paper, we first modify MIA to properly deal with internal computations including internal must-transitions, which were largely ignored already in IOMTS. We then study a MIA variant that adopts MIO’s pessimistic—rather than IOMTS’ optimistic—view on component compatibility and define, for the first-time in a pessimistic, non-deterministic setting, conjunction and disjunction on interfaces. For both the optimistic and pessimistic MIA variant, we also discuss mechanisms for extending alphabets when refining interfaces, which is a desired feature for perspective-based specification. We illustrate our advancements via a small example. 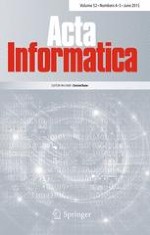 Compositional construction of most general controllers

A life dedicated to informatics: an obituary for Prof. Friedrich L. Bauer