In this article, we discuss the results of a survey on the perception of climate change in the 14 “tourist zones” (as defined by the Spanish Statistical Institute, INE) that stretch from the French border to Gibraltar alongside the Spanish Mediterranean coast, including the Balearic Islands. Our sample consisted of 1,014 telephone interviews stratified according to the number of tourists staying in each zone. Respondents showed concern for the likely impacts of climate change on jobs and thought that climate change would reduce the economic activity of their areas. Responses were also pessimistic regarding future water availability but agreed with the development of alternative sources such as desalination and water re-use. Household size, educational levels, and employment tended to be the most significant statistical explanatory factors regarding attitudes toward climate change. Respondents in larger households (a variable not tested in the literature as far as we know), respondents with higher education, and respondents working for a wage tended to express more concerns than the rest. 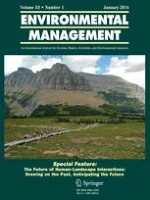 Can Human-made Saltpans Represent an Alternative Habitat for Shorebirds? Implications for a Predictable Loss of Estuarine Sediment Flats

The Future of Human–Landscape Interactions: Drawing on the Past, Anticipating the Future