This paper examines risk-taking in tournaments experimentally. More precisely, we investigate two potential drivers of risk-taking in tournaments. The first driver is the proportion of tournament winners, which is a design parameter and therefore endogenous for firms. We find that a lower proportion of winners encourages employees to take more risk. The second potential driver is exogenous. We investigate the reliance on simplified decision rules as a behavioral bias of employees working under tournament incentives. Tournaments require employees to use strategic optimization, which means considering the behavior of other contestants. Though much of the analytical literature builds on this assumption, we find that employees instead rely on simplified decision rules. If a particular strategy appears more attractive based on such simplified decision rules, employees are more likely to choose this strategy even if it implies taking more risk. We also find significant interaction between the proportion of winners and the use of simplified decision rules. Our results confirm that employees reduce risk-taking over time in a setting where each unit of risk is excessive. However, this appears to result from trial-and-error learning rather than understanding the strategic character of tournaments, because, though reduced, the level of risk-taking remains too high.

From January 2013, the Zeitschrift für Betriebswirtschaft (ZfB) is published in English under the title Journal of Business Economics (JBE). The Journal of Business Economics (JBE) aims at encouraging theoretical and applied research in the field of business economics and business administration, promoting the exchange of ideas between science and practice. 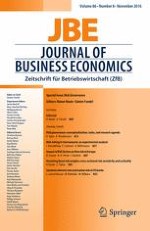 Impact of ESG factors on firm risk in Europe

Systemic interest rate and market risk at US banks