Anthropogenic habitats, which are frequently occupied by otherwise endangered species of the open landscape, suffer from a lack of sustainability. Here, we analyzed one of the few sustainable anthropogenic habitats, roadside verges. We hypothesized that steppe-like habitats at upper parts of south-exposed slopes of roadside verges may serve as the only strongholds of threatened species ousted from the surrounding intensively cultivated landscape, with direct consequences for plant pollination and other ecosystem services. We examined bees and wasps alongside Highway 7 constructed 14–28 years ago in the northwestern Czech Republic. The sampling sites were located 4–17 m from paved road with traffic intensity of 9523 to 38,688 vehicles × 24 h−1, and they consisted of steppe-like habitats with patches of bare soil (sand, loess and claystone) that formed and were maintained spontaneously. The sites were not connected to any permanent grasslands or forests, and they were surrounded mostly by arable fields. We found 139 species of herbs (nine threatened) in vegetation surveys along transects. We identified 164 species of bees and wasps, with a dominance of 0.052 and a Fisher’s alpha of 45.0; 32 species were threatened, including a second Czech record of Chrysis gribodoi spilota and four critically endangered species (Andrena florivaga, Halictus scabiosae, Sphecodes spinulosus and Nanoclavelia leucoptera). The captured specimens consisted of a higher number of loess specialists and other steppe species compared to specimens associated with other anthropogenic habitats that provide bare ground (sand pits and ash deposits). In conclusion, the formation of spontaneously maintained steppe-like habitats at roadside verges should be considered to be an appropriate tool supporting the biodiversity in the highly cultivated landscape of central Europe. 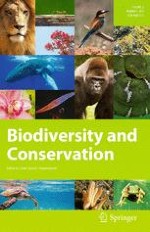 A sophisticated species conservation strategy for Nyssa yunnanensis, a species with extremely small populations in China