A computer vision-based autonomous fire suppression system with real-time feedback of fire size and spray direction is presented in this paper. The system has been developed for use in a firefighting robot for close-range, localized fire suppression tasks in enclosed environments. A probabilistic water classification method was developed for segmenting water spray in a pair of IR cameras. Stereo processing was performed to localize points along the spray path for use in yaw and pitch angle estimation. A Golden Section Search with linear least squares optimization was used to determine the optimal pitch angle of the spray position at each sampling time. Kalman filtering was used to remove noise from the angle measurements and obtain a better estimate of the current nozzle orientation. A decision tree was used to determine the correct nozzle positioning mode using image feedback to suppress the fire and accounts for errors in direction, fire size during suppression, and when to adjust the nozzle based on IR feedback. Through implementation of a PI controller, the system is able to correct for unknown disturbances causing erroneous targeting of a localized fire. Experiments are presented with the initial nozzle angled correctly and with forced offsets in the system to set the initial spray position incorrectly in order for the system to correct. Suppression times ranged from 7.2 s to 16.3 s with a standard deviation of 3.9 s and average time of 11.2 s. A total of 12 tests demonstrated performance of the system given a forced offset to the initial nozzle orientation resulting in an error between the spray location and the fire target. Suppression times ranged from 8.1 s to 27.9 s with a mean of 16.9 s and standard deviation of 6.2 s. The proposed system can be implemented on a robotic firefighting platform to autonomously detect a fire, choose a proper manipulation goal and suppress full scale fires given disturbances causing erroneous targeting. 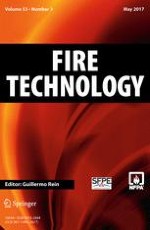 Experiments and Numerical Simulations of Pressure Effects in Apartment Fires