A robotic assembly system for small components precision assembly is designed, which mainly comprises an industrial robot, three cameras, and a force sensor. The industrial robot is employed to conduct two classic assembly subtasks, i.e., grasping and pose alignment. An automatic grasping method with monocular vision guidance is proposed. The grasping strategy consists of three stages, i.e., aligning, approaching, and grasping, and picks up components with high efficiency. Moreover, a coordinated pose alignment strategy with two eye-to-hand microscopic cameras is developed. It can realize pose alignment efficiently and accurately. Besides, based on differential movement principle, the position offset due to the end-effector’s orientation adjustment is calculated and compensated, which avoids the grasped component out of the microscopic cameras’ field of view. Finally, a series of grasping and pose alignment experiments are conducted on designed robotic precision assembly system to verify the effectiveness of the proposed grasping and pose alignment methods. The grasping success rate is up to 100% with 30 times experiments, the orientation alignment error is less than 0.05∘, and the position alignment error is less than 26 μ m. 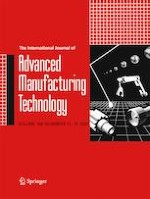