Rockburst characteristics and numerical simulation based on a new energy index: a case study of a tunnel at 2,500 m depth | springerprofessional.de Skip to main content
TOOLBAR 1 2 3 4
SUCHE MENÜ 1 2 3 4

Rockburst is one of the most difficult problems encountered in the pilot tunnels of the Jinping II hydropower station, where the rock cover is up to 2,500 m. Some typical characteristics of the rockburst events are summarized. These events indicate the intrinsic reason of rockburst is energy release. In order to understand the outburst mechanism, a new energy index, the Local Energy Release Rate (LERR), is put forward to simulate the conditions causing rockburst. By tracking the peak and trough values of elastic strain energy intensity before and after brittle failure, the LERR was developed to help understand rockburst from the viewpoint of energy release. To test its reliability, the brittle breakage of Mine-by tunnel rock in Canada and two rock bursts in the Jinping pilot tunnels were simulated. The results showed that LERR can satisfactorily predict the intensity of a rockburst and the depth of the outburst pit. Although it is not yet possible to determine thresholds at which rockbursts will occur, the study indicates the potential of LERR for evaluating rockbursts in deep underground excavations. 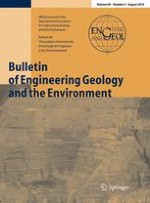 Effect of opening on the shear behavior of a rock joint