The research described in this paper provides information about the rockbursting potential of kimberlite. Kimberlite is a diamond-bearing rock found in deposits around the world including northern Canada. This paper outlines three methods for the prediction of rockbursts based on the properties of a rock. The methods include the: strain energy index, strain energy density, and rock brittleness. Kimberlite samples collected from Diavik, a diamond mine in northern Canada, were tested to define the rock’s uniaxial compressive strength, tensile strength, and hysteresis loop. The samples were separated into sub-rock types based on their descriptions from the mine geologists. The results indicate that it is possible to produce rockbursts in kimberlite. It was also observed that the sub-rock types had a range of rockbursting properties. Some types of kimberlite exhibited little to no potential for producing bursts, while other types potentially could produce violent bursts. The diverse nature of kimberlite indicates that the rockbursting properties of the rock should not be generalized and are dependent on the sub-rock type being encountered. 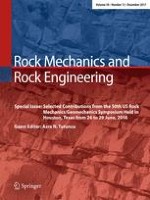 Introduction to Selected Contributions from the 50th US Rock Mechanics/Geomechanics Symposium Held in Houston, Texas, from June 26 to 29, 2016