The detailed procedure of modeling spectral responsivity characteristics for separate absorption and multiplication (SAM) \(\hbox {GaN/Al}_{0.15}\hbox {Ga}_{0.85}\hbox {N}\) avalanche photodiode (APD) is presented. In order to verify the validity of numerical models, the photoresponse spectra under different biases are first shown. It is found that a window region with wavelength range from 330 to 360 nm is formed regardless of reverse bias, and the responsivities with wavelength range from 240 to 380 nm notably increase with bias. The role of n-type AlGaN layer in the photoresponse mechanism is then primarily studied. Our discussion focuses on the dependence of responsivity on the thickness and doping concentration of n-type layer, respectively. It is demonstrated that the rejection ratio of the detector increases exponentially with the thickness of n-type layer as long as its thickness exceeds 50 nm. Finally, the optimal doping concentration of n-type layer is obtained for optimizing SAM GaN/AlGaN APD. 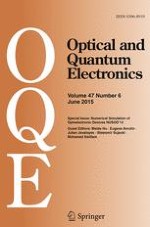