Over the past few decades, the automation of seaport container terminal equipment has steadily increased. Automated rail-mounted gantry cranes (RMGs) represent a major success story from this period, and they have allowed terminal designers to increase the number of containers processed and stored with less cost and fewer space requirements.
Typically, in seaport container terminals, containers are temporarily stored in blocks, and different types of devices are available to manage those blocks. Among them, we find RMGs which span the whole storage block in width and move on tracks installed alongside the block. As opposed to straddle carriers and rubber-tired gantry cranes, which are not automated, RMGs are fixed to a certain block within the container storage area. As a consequence, they can handle containers only within the storage area and hence have to hand over the containers to transport devices or receive containers from them at the short side of the block.
Anzeige
We can find one of four different settings of one to three RMGs managing a single block. First, there might be a single crane managing the block. Second, we can have two identical cranes running on the same pair of rails. Obviously, these cranes cannot pass each other, and thus one is always located closer to the seaside and the other closer to the landside. We refer to cranes in this setting as twin cranes. In a third scenario, we might find two cranes of different sizes running on separate pairs of rails. The smaller crane can move below the larger crane, and thus these cranes can pass each other. However, the smaller crane can be located below the larger crane only if the larger crane’s spreader is up. We refer to cranes in this setting as crossover cranes. Finally, there might be three cranes, two identical smaller ones and a larger one. The smaller ones cannot pass each other, but both can pass the larger one. In this paper, the focus is on settings with two cranes.
In addition to resolving the technological issues arising with process automation, sophisticated scheduling techniques are required. While scheduling a single crane might already be a challenging task (see Gharehgozli et al. ( 2014)), the problem becomes much more than just sequencing of tasks if multiple cranes are considered. First, it must be determined which crane is to conduct which task. Second, because the cranes might interfere with each other, the right of way must be established. We can imagine a hierarchical approach on three levels to execute this three-part decision. First, we determine the assignment of tasks to cranes, then the task sequences for each crane, and finally the right of way in the case of interference. The subproblem on the third level has been considered in Briskorn and Angeloudis ( 2016) and Briskorn and Zey ( 2018). The approaches developed have proved beneficial as workhorses in more involved optimization approaches, tackling the three decision levels in an integrated manner in Briskorn and Zey ( 2020), Nossack et al. ( 2018), and Zey et al. ( 2020). Eilken ( 2019) generalizes the approach for twin cranes in Briskorn and Angeloudis ( 2016) and employs it to solve a subproblem as well.
Each of the aforementioned approaches aims for a minimum makespan schedule. While it is easy to motivate makespan minimization, there are many other objective functions that might be interesting. For example, due dates might be associated with tasks representing containers to be handed over to trucks, and a reasonable objective would be to minimize total tardiness of tasks. In this paper, we investigate the subproblem on the third level for two cranes and various objective functions, and we develop algorithms for the respective optimization problems. These algorithms could be employed as subroutines in future research, similarly to those in Briskorn and Angeloudis ( 2016) and Eilken ( 2019).

The contribution of this paper is threefold. First, we formalize the problem setting, distinguishing between crossover cranes and twin cranes and two types of objective functions. Second, we provide a pseudo-polynomial-time algorithm for the most general problem settings considered. Third, we show that, depending on the type of objective function, the problem is NP-hard or can be solved in polynomial time. Furthermore, we provide strongly polynomial-time algorithms for two important special cases.
We restrict ourselves to a deterministic and offline perspective on the optimization problem, for two reasons. First, it allows for a thorough analysis of the inherent complexity of the problem. As we will see, the computational complexity of the problem is heavily dependent on the objective function under consideration. We hope that these insights and the algorithmic framework we develop will provide a valuable starting point for developing algorithms for more involved problems as well, for example, those addressing the first two levels of the three-part decision. Second, while it is true that container terminals are highly dynamic and stochastic environments which often require frequent revising of decisions, those revisions will most likely also involve the first two levels. Hence, in order to account for the dynamic and stochastic nature, we need an integrated approach for the three-part decision. We can easily imagine how a more involved approach, potentially applied in a rolling horizon scheme, bears the deterministic (sub)problem setting considered in this paper, and this approach might benefit from a component that can efficiently solve the deterministic subproblem. We provide such a component.
The paper proceeds as follows. In Sect. 2, we outline the problem characteristics and formally define the problem settings. Section 3 focuses on the general problem settings. Here, we show that it is binary NP-hard or can be solved in polynomial time depending on the objective function considered. Section 4 highlights important special cases that can be solved in strongly polynomial time. Finally, we conclude the paper in Sect. 5.

In this section, we first provide an informal problem description in Sect.  2.1 and then a formal one in Sect.  2.2.

We consider a block in the storage area of a container terminal managed by two cranes. Each crane’s gantry spans the whole block in width and moves on a pair of rails installed alongside the block. There is a trolley which moves on the horizontal beam of the gantry and from which a spreader can be lowered to pick up or release a container. By moving the gantry, trolley, and spreader, each position in the three-dimensional block can be reached. Furthermore, the gantry can move outside the block to a limited extent to reach automated guided vehicles or trucks for handing over containers to them or receiving containers from them. We refer to the areas for handovers as seaside and landside handover areas, respectively. Figure  1 depicts multiple such blocks with two cranes each.
×
Interference between cranes depends on the crane setting. For two twin cranes which cannot pass each other (as depicted in Fig.  1), we require that one is closer to the seaside handover area than the other throughout the planning horizon. For two crossover cranes, we require that the positions of their gantries do not overlap when the larger crane’s spreader is lowered. That is, both cranes can pass each other and can be present in the same gantry position as long as the larger crane has its spreader up.
For each crane, we have a predetermined sequence of containers given. Each container is associated with an origin position within the block (including positions in handover areas) and a destination position within the block (including positions in handover areas). Moreover, for each container, the time necessary for lifting it up from its origin position and the duration for dropping it off at its destination position is given. These container sequences prescribe the order in which each crane conducts the container transport assigned to it. Also, for each container and both its pickup and its drop-off, we have a release date denoting the first time point that it can be started and a deadline denoting the last time point at which it can be completed. Finally, two cost functions are given for each container, mapping the time a container is lifted and the time a container is set down to a cost value. How these cost values are consolidated to a schedule’s objective value depends on the objective function itself.
In this paper, we impose simplifying assumptions, as follows.

In this section, we consider special cases of Crossover-Sum and Twin-Sum which can be solved in strongly polynomial time.

In this paper, we considered a generalization of a problem setting that has been considered in Briskorn and Angeloudis ( 2016) and of a subproblem arising in Eilken ( 2019). These problems were proven beneficial when employed as workhorses in Eilken ( 2019), Nossack et al. ( 2018), and Zey et al. ( 2020), but were limited to the objective of makespan minimization. This motivated the investigation of a fairly general setting in the paper at hand. Here, we consider twin cranes and crossover cranes with predetermined task sequences, release dates and deadlines of tasks, movement of cranes along the three dimensions of a container storage block, and the objectives to minimize total task cost or maximum task cost where a task’s cost is determined by a task-dependent non-decreasing function of the task’s completion time.
In this paper, we resolve the complexity of the most general problem settings. We show that the problem of minimizing total task cost is binary NP-hard for both crane settings. However, a solution minimizing maximum task cost can be determined in polynomial time. For both structures of objective functions, we provide general DP frameworks. Furthermore, we provide strongly polynomial algorithms for two important special cases. Note that our algorithmic ideas for Crossover-Sum and Twin-Sum essentially rely on a reduction in the problem at hand to the problem of finding the shortest path in an acyclic graph. This path can be determined by DP, as proposed in this paper. However, every off-the-shelf shortest path solver can be applied to solve our problem as well.
For future research, we can think of various directions. First, since the problem is motivated mainly as a subproblem in more involved problem settings, it would be interesting to develop algorithms with even better worst-case run time behavior. Second, the algorithms provided here open new opportunities to tackle holistic crane scheduling problems with objectives other than makespan minimization. In fact, in our opinion, the most promising way to benefit from our algorithms in terms of increased efficiency in real-world terminals is not to apply them in a post-processing step in an existing terminal control system, but to embed them in an integrated approach to address the three-part decision.
Open AccessThis article is licensed under a Creative Commons Attribution 4.0 International License, which permits use, sharing, adaptation, distribution and reproduction in any medium or format, as long as you give appropriate credit to the original author(s) and the source, provide a link to the Creative Commons licence, and indicate if changes were made. The images or other third party material in this article are included in the article’s Creative Commons licence, unless indicated otherwise in a credit line to the material. If material is not included in the article’s Creative Commons licence and your intended use is not permitted by statutory regulation or exceeds the permitted use, you will need to obtain permission directly from the copyright holder. To view a copy of this licence, visit http://​creativecommons.​org/​licenses/​by/​4.​0/​. 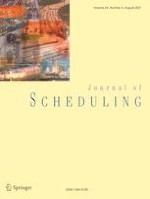 A note on the complexity of two supply chain scheduling problems