» Jetzt Zugang zum Volltext erhalten
Wichtige Hinweise
Editor’s note from Steven Rogelberg: In 2011, I invited Scott and James to write a Methods Corner piece on relative importance analyses. Their piece was important and impactful. In this editorial, I invited them to follow up on their earlier work by introducing a free tool they designed to enable scholars to easily implement relative weights analyses. I just want to thank Scott and James for this terrific service they provided our discipline.

Over the last 15 years, a number of methodological developments have enabled researchers to draw more accurate inferences concerning the relative contribution (i.e., relative importance) among multiple (often correlated) predictor variables in a regression analysis. One such development has been relative weight analysis (RWA). Researchers can use a RWA to decompose the total variance predicted in a regression model (R 2) into weights that accurately reflect the proportional contribution of the various predictor variables. Prior to RWA, researchers were forced to rely on traditional statistics (e.g., correlations; standardized regression weights), which are known to yield faulty or misleading information concerning variable importance (especially when predictor variables are correlated with one another, which is often the case in organizational research). Although there has been a surge of interest in RWA over the last 10 years, integration of this statistical tool into organizational research has been hampered by the lack of a user-friendly statistical package for implementing RWA. Indeed, most popular statistical packages (e.g., SPSS, SAS) have yet to include RWA protocols into their regression modules. The purpose of this paper is to present a new, free, comprehensive, web-based, user-friendly resource, RWA-Web, which may be used by anyone having simple access to the internet. Our paper is structured as a tutorial on using RWA-Web to examine relative importance in the classic multiple regression model, the multivariate multiple regression model, and the logistic regression model. We also illustrate how RWA-Web may be used to conduct null hypothesis significance tests using advanced bootstrapping procedures. 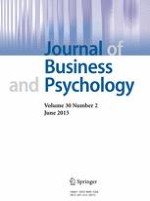 Perceptions of Nepotism Beneficiaries: The Hidden Price of Using a Family Connection to Obtain a Job

Exploring the Use of Credit Scores in Selection Processes: Beware of Adverse Impact

The Associations between Ethical Organizational Culture, Burnout, and Engagement: A Multilevel Study

Political Skill Dimensionality and Impression Management Choice and Effective Use