Counters are an important abstraction in distributed computing, and play a central role in large scale geo-replicated systems, counting events such as web page impressions or social network “likes”. Classic distributed counters, strongly consistent via linearisability or sequential consistency, cannot be made both available and partition-tolerant, due to the CAP Theorem, being unsuitable to large scale scenarios. This paper defines Eventually Consistent Distributed Counters (ECDCs) and presents an implementation of the concept, Handoff Counters, that is scalable and works over unreliable networks. By giving up the total operation ordering in classic distributed counters, ECDC implementations can be made AP in the CAP design space, while retaining the essence of counting. Handoff Counters are the first Conflict-free Replicated Data Type (CRDT) based mechanism that overcomes the identity explosion problem in naive CRDTs, such as G-Counters (where state size is linear in the number of independent actors that ever incremented the counter), by managing identities towards avoiding global propagation and garbage collecting temporary entries. The approach used in Handoff Counters is not restricted to counters, being more generally applicable to other data types with associative and commutative operations. 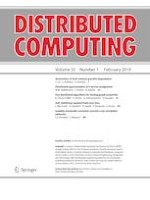