With the rapid economic development of China and the improvement of people’s living standards, municipal plastic waste (MPW) has increasingly become a major problem for cities in China. The generation of plastic waste is a system which integrates social, economical and environment factors. There is a certain guiding significance for the determination of urban plastic waste management priorities to research MPW generation with the background of the regional development of the city. As the capital of China, Beijing develops with a typically regional characteristic. This article establishes a generation system model for MPW by the method of system dynamics, and takes Beijing as an example to simulate and forecast the MPW generations of four functional areas on scenarios. The data used in the model were mainly obtained from statistical materials and on-site survey. The results showed a better regulating effect of the generation of MPW of Beijing under an integrated control scenario. In terms of space, MPW generation of the urban function extended districts generated the largest amount of plastic waste, with the largest growth rate; the proportion of MPW generation of the new districts of urban development increased significantly. In terms of generation source, the resident communities source generated the largest amount of the MPW. Based on the results, some suggestions on MPW management are put forward. 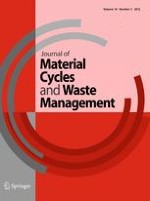 Degradation activity of Clostridium species DC-1 in the cis-1,2-dichloroethylene contaminated site in the presence of indigenous microorganisms and Escherichia coli