The Yangtze River is the main water source in Jiujiang City. Thus, the city faces a crisis in domestic water supply whenever the river suffers from any unexpected contamination. The availability of groundwater and the risk of pollution caused by extraction from the riverside aquifers should be determined before the groundwater can be used for emergency water supply. A numerical model of flow and transport based on the regional hydrogeological condition and 52 borehole data is developed in this study for evaluating groundwater availability and pollution risk. Results showed that the riverside aquifers can be used for emergency water supply despite the river contamination. However, the contamination had environmental effects on the water source. Thus, temporal and spatial variations of contaminants in groundwater were analyzed using the transport model. Some measures, such as pumping and injecting schemes, were suggested to protect groundwater from pollutants. An acceptable measure was also suggested to protect the water source by calculation and comparison with different methods. This research provides an important basis for proper exploitation and scientific protection and management of groundwater resource in Jiujiang City. In addition, the study has reference value to other riverside aquifers. 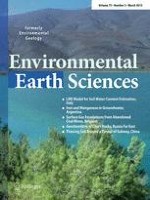 Iron and manganese content in groundwater on the northeastern coast of the Buenos Aires Province, Argentina