Starting from the assumption that school to work transitions constitute not only the end goal but also an integral part of educational trajectories, this article reconstructs the narratives of the decision-making processes of young people at the end of lower secondary education, namely the ways in which decision-making is referred to, the temporal horizons in which transitional decisions are embedded, the criteria of decision-making, the actors they mentioned and obviously also the relationship between structural constraints and individual choice, both in explicit references and emerging from interpretative analysis. A special analysis considers the decision-making of disadvantaged youth and the way in which it evolves differently in five European countries, focussing on the questions of whether and to what extent school succeeds in combating social inequality. 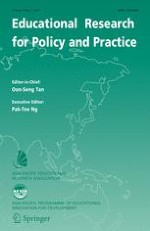 Aspirations of and realities for Hong Kong students: is the “formal” transition system effective?

Partnerships for effective training to work transitions: a case study of the Skillman Alliance

Education pays off! On transition to work for 25 year olds in Norway with upper secondary education or lower as their highest educational level

School-to-work transitions in the OECD: do education systems make a difference?

Complexities of school to work transitions