The models for material nonlinearity include tensile, compressive, and shear models for cracked concrete and a model of reinforcing steel, where the smeared crack approach is incorporated.
Concrete models may be divided into isotropic uncracked concrete models and cracked concrete models. For cracked concrete, the three models are for depicting concrete behavior in the direction perpendicular to the crack plane, in the direction of the crack plane and in the shear direction at the crack plane (see Fig. 1). The basic model adopted for crack representation is the nonorthogonal fixed crack approach of the smeared crack concept.
×
The post-yield constitutive relationship of the reinforcement in concrete takes into account the bond characteristics, and is a bilinear model, as shown in Fig. 2 (Kim et al., 2003). The transverse reinforcing bars confine the core concrete, suppress the buckling of the longitudinal reinforcing bars and improve the ductility capacity of the unconfined concrete. In this study, writer basically adopted the model proposed by Mander et al. (1988).
×
Fatigue damage of reinforced concrete bridge columns under seismic load seems inevitable, and the fatigue damage may be characterized as low cycle fatigue of reinforcing bars and concrete strength deterioration (Kim et al., 2005).
A complete description of the nonlinear material model is provided by authors (Kim, 2012, 2019; Kim et al., 2003, 2005, 2007).

The deteriorated reinforced concrete beams tested by Rodriguez et al. (1997) were used to validate the proposed deteriorated nonlinear material model.
The reinforced concrete beams were cast adding calcium chloride to the mixing water, subjected to an accelerated corrosion process with a current density of 100 mA/cm2 and finally loaded up to failure. Fig. 4 shows the beam specimens details and reinforcement arrangements. The mechanical properties of the specimens are listed in Table 1.
Table 1
Properties of deteriorated test specimens.
\({f}_{ck}\)= 50 MPa
\(\Phi 6 {f}_{sy}\)= 626 MPa; \(\Phi 8 {f}_{sy}\)= 615 MPa; \(\Phi 10 {f}_{sy}\)= 575 MPa.
×
Fig. 5 shows the finite-element discretization and the boundary conditions for deteriorated reinforced concrete beam specimens. Mesh size sensitivity analysis is also carried out. The cross-sectional area of the corroded reinforcing bars is computed by the proposed corrosion penetration model.
×
The mid-span load–deflection response for non-deteriorated beam specimen is shown in Fig. 6a. Fig. 6b, c also shows the experimental and analytical load–deflection relation of deteriorated beam exhibiting flexural failure with rupture of the tensile reinforcing bars.
×
In predicting the results of the deteriorated reinforced concrete beams, the mean ratios of experimental-to-analytical maximum strength were 1.03 at a CV of 2%. The good agreement between experimental and analytical results demonstrates the accuracy of the proposed deterioration model. However, the analytical results with proposed model cannot capture the softening responses of the components due to the load control.

In this section, a parametric study of the two-span bridges is conducted to provide a better understanding of the seismic performance of deteriorated reinforced concrete bridges.

An application example shown in Fig. 7 was designed to obtain seismic performance data of reinforced concrete bridges having details typical of those in use in regions of moderate seismicity (Korea Expressway Corporation, 2000).
×
The total length of the bridge slab is 30 m, with spans of 17 m and 13 m. The height of the bridge columns is 9.75 m. Fig. 7 shows the overall dimensions of the bridge: area of slab \({A}_{dx}\)= 17.475 m2; moment of inertia in the bridge axis direction \({I}_{z}\)= 1.299 m4; moment of inertia in the direction perpendicular to the bridge axis \({I}_{y}\)= 496.340 m4; torsional moment of inertia \(J\)= 4.973 m4. The columns have circular cross section with diameter \(\Phi\) = 1000 mm and are reinforced with D25 longitudinal bars.
The constitutive laws are also defined by the following nominal values: concrete compressive strength \({f}_{ck}\)= 27 MPa; steel yielding strength \({f}_{sy}\)= 400 MPa. Seismic nonlinear analysis is carried out by considering a uniform gravity load of 491 kN/m, including self-weight and dead loads applied on the slab. The two-span simply supported reinforced concrete bridge was designed considering current recommendations and requirements for shear and confinement (AASHTO, 2012; CEN, 2004; MCT, 2015).
Non-linear time-history analyses are performed for a set of artificial earthquakes generated to comply with the elastic response spectrum given by MCT (2015) (see Fig. 8). The PGA (Peak Ground Acceleration) value for artificial earthquake is 0.154 g, and the duration is 17.3 s. A procedure was applied to the bridges by incrementally increasing the earthquake amplitudes by multiplying the acceleration time history by a scalar factor. Six artificial earthquakes were 1 × 0.154 g, 2 × 0.154 g, 3 × 0.154 g, 4 × 0.154 g, 5 × 0.154 g, and 6 × 0.154 g.
×
The bridge slab is modelled by reinforced concrete plane stress elements in RCAHEST, as shown in Fig. 9. Fig. 9a shows the finite-element discretization and the boundary conditions for the two-span simply supported reinforced concrete bridges. Fig. 9b shows a method for transforming a circular section into rectangular strips for the purpose of using plane stress elements. For rectangular sections, equivalent strips are calculated. After the internal forces are calculated, the equilibrium is checked. In this study, the Hilber–Hughes–Taylor (HHT) method is adopted for the solution of the dynamic equilibrium equations.
×
For comparison, a finite-element model of the two-span reinforced concrete bridge is also established in SAP2000 version 7.4 (Computers & Structures, Inc., 2000). The columns’ plastic hinges are modeled and the confined concrete model proposed by Mander et al. (1988) is used.
The fundamental period of the two-span simply supported reinforced concrete bridge is 0.667 s. As shown in Table 2 and Fig. 10, the seismic nonlinear analysis results by SAP2000 were similar to the results by RCAHEST. The good agreement between numerical results by SAP2000 and RCAHEST demonstrates the accuracy of the proposed finite-element model.
Table 2
Analytical results with SAP2000.
M Multi-model spectrum analysis, T Time-history analysis.
×

The research described herein was sponsored by a grant from R&D Program of the Korea Railroad Research Institute, Republic of Korea.

The author declares no competing interests.
Open AccessThis article is licensed under a Creative Commons Attribution 4.0 International License, which permits use, sharing, adaptation, distribution and reproduction in any medium or format, as long as you give appropriate credit to the original author(s) and the source, provide a link to the Creative Commons licence, and indicate if changes were made. The images or other third party material in this article are included in the article's Creative Commons licence, unless indicated otherwise in a credit line to the material. If material is not included in the article's Creative Commons licence and your intended use is not permitted by statutory regulation or exceeds the permitted use, you will need to obtain permission directly from the copyright holder. To view a copy of this licence, visit http://​creativecommons.​org/​licenses/​by/​4.​0/​. 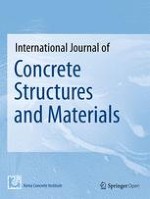