Finite element-based gradientless shape optimization methods are easily implemented and can successfully result in component designs with desired functional improvements. However, because they are not mathematically rigorous, the specific optimization formulation can affect the resulting geometry and the achievement of the optimization goal. A method is developed for biological-based shape optimization schemes which adjusts the scaling factor by a function of both the current element size and stress state so that a nearly constant rate of shape change is maintained over the course of the optimization, despite the approach towards the optimization goal. The effectiveness of the developed method is compared to a constant scaling factor, ones that are a function of either the current mesh or the current stress state alone. If the achievement of the optimization goal is defined as a desired amount of improvement in the stress state over that in the initial solution, the optimal solution was found to be path-independent and not influenced by the scaling factor used. However, the developed method provides a more consistent and efficient means of attaining the optimal geometry and can be used for any mesh or applied load. The method was implemented to successfully optimize the outer profile of a cantilever beam, the central hole of a biaxially loaded infinite plate, and both surfaces of a hollow cylinder under combined compression, torsion, and bending loads. The presented method may be particularly useful in parametric studies or when evaluating the sensitivities of the optimal design to different environmental conditions. 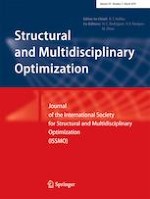