The microstructure stability during δ sub-solvus annealing in Inconel 718 was investigated, focusing on the conditions that may lead to the development of very large grains (about 100 μm) in a recrystallized fine grained matrix (4 to 5 μm) despite the presence of second-phase particles. Microstructure evolution was analyzed by EBSD (grain size, intragranular misorientation) and SEM (δ phase particles). Results confirm that, in the absence of stored energy, the grain structure is controlled by the δ phase particles, as predicted by the Smith–Zener equation. If the initial microstructure is strained (ε < 0.1) before annealing, then low stored energy grains grow to a large extent, despite the Zener pinning forces exerted by the second-phase particles on the grain boundaries. Those selectively growing grains could be those of the initial microstructure that were the least deformed, or they could result from a nucleation process. The balance of three forces acting on boundary migration controls the growth process: if the sum of capillarity and stored energy driving forces exceeds the Zener pinning force, then selective grain growth occurs. Such phenomenon could be simulated, using a level set approach in a finite element context, by taking into account the three forces acting on boundary migration and by considering a realistic strain energy distribution (estimated from EBSD measurements). 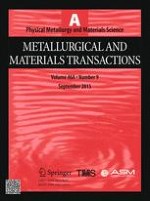