Herein, one-step conversion of cellulose dissolved in 1.75 mol L−1 NaOH/0.074 mol L−1 ZnO aqueous solution to organic acids was realized through a hydrothermal degradation without heterogeneous catalyst. The effects of solvent, the concentrations of NaOH and ZnO, O2 pressure, temperature and the reaction time on the yield of organic acids were investigated and discussed. The components of the degraded products were characterized with total organic carbon and high performance liquid chromatography. The results indicated that cellulose was depolymerized successfully to organic acids. Formic acid as the predominant species with 80.0% yield was obtained at the optimal conditions (150°C, 2 h, 3.0 MPa O2), which was much higher than those reported in literatures. The small amount of ZnO in the solvent played an important role not only to promote the cellulose dissolution, but also to accelerate its oxidative degradation. The main features of this one-step degradation of cellulose were the green solvent, pre-dissolution of catalyst, and high selectivity. This work opened up a new avenue for the conversion of cellulose to organic acids under mild conditions.

The oxidative degradation of cellulose dissolved in NaOH/ZnO aqueous solution into organic acids was conducted under pressed O2 without heterogeneous catalyst. The yield of FA which was the main product reached up to 80.0%.
× 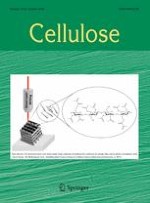 Effect of softener in home laundering of cotton fabric: a study of low-stress mechanical properties