In recent years, Business Intelligence (BI) systems have undergone two distinctly different fundamental changes. On the one hand, social media systems, machine sensors, devices like smart phones, and other sources generate new data which often differ from traditional operational data regarding their structure, rate of growth, and volume (McAfee and Brynjolfsson 2012). On the other hand, the scope of BI has been extended from strategic questions to operational tasks so that more employees have a need to apply BI (Böhringer et al. 2010). These developments have created more demand for BI reporting and pattern search. In addition, the frequency of requests for changes by businesses has also increased (Yu et al. 2013). Consequently, BI specialists who are either IT professionals or experienced BI users in functional departments (so called power users) has become an even bigger bottleneck than before (Kobielus 2009). Unexperienced users (so called casual users) who need to make time-critical business decisions sometimes act, therefore, without exploiting all available data (Abelló et al. 2013). In response to these developments, the approach of Self-Service BI (SSBI) has been suggested (e.g., Imhoff and White 2011). SSBI should, on one hand, empower casual users to perform custom analytics and to derive actionable information from large amounts of multifaceted data without having to involve BI specialists. Power users, on the other hand, can accomplish their tasks with SSBI more easily and quickly than before. Or, in Eckerson’s words ( 2009): “users create exactly the reports they want, when they want them…”. …
Anzeige
Vorheriger Artikel Design Principles for High-Performance Blended Learning Services Delivery
Nächster Artikel Call for Papers: Issue 5/2017 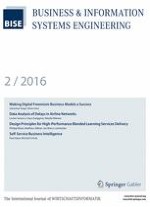 BISE and the Engineering Sciences