Softening of ice surface under friction is explored in terms of the rheological model for viscoelastic matter approximation. The non-linear relaxation of strain and fractional feedbacks are allowed. Additive non-correlated noise associated with shear strain, stress as well as with temperature of ice surface layer, is introduced, and a phase diagram is built where the noise intensities of the stress and temperature define the domains of crystalline ice, softened ice, and two types of their mixture (stick-slip friction). Conditions are revealed under which crystalline ice and stick-slip friction proceed in the self-similar mode. Corresponding strain power-law distribution is provided by temperature fluctuations that are much larger than noise intensities of strain and stress. This behavior is fixed by homogenous probability density in which characteristic strain scale is absent. Since the power-type distribution is observed at minor strains, it meets self-similar crystalline ice surface. Constructed friction force time series are investigated for all rubbing regimes using fast Fourier transformation and autocorrelation function analysis. It is revealed that these series represent “pink”-colored noise and weak correlations are realized in the system. The conclusion is drawn that the results of tribological experiment can be forecasted. 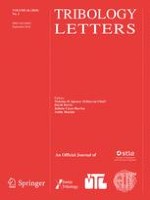 On the Modeling of Adhesive Wear with Consideration of Loading Sequence

Insight into the Viscous and Adhesive Contributions to Hydrogel Friction