While any grasp must satisfy the grasping stability criteria, good grasps depend on the specific manipulation scenario: the object, its properties and functionalities, as well as the task and grasp constraints. We propose a probabilistic logic approach for robot grasping, which improves grasping capabilities by leveraging semantic object parts. It provides the robot with semantic reasoning skills about the most likely object part to be grasped, given the task constraints and object properties, while also dealing with the uncertainty of visual perception and grasp planning. The probabilistic logic framework is task-dependent. It semantically reasons about pre-grasp configurations with respect to the intended task and employs object-task affordances and object/task ontologies to encode rules that generalize over similar object parts and object/task categories. The use of probabilistic logic for task-dependent grasping contrasts with current approaches that usually learn direct mappings from visual perceptions to task-dependent grasping points. The logic-based module receives data from a low-level module that extracts semantic objects parts, and sends information to the low-level grasp planner. These three modules define our probabilistic logic framework, which is able to perform robotic grasping in realistic kitchen-related scenarios. 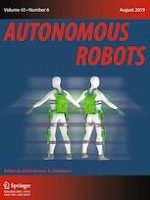 Pushing corridors for delivering unknown objects with a mobile robot