Real-time crash prediction models are often structured as general log-linear categorical models which must be calibrated using an extensive database. However, there is no method to optimally select the number of categories and the values that define the boundaries between categories when representing continuous measures as categorical variables within the log-linear model. This raises the question of how important the calibration is to the safety impacts estimated when using the crash prediction model. In this paper, we examined the impact that the process used to calibrate the crash prediction model has on estimates of safety impacts of a variable speed limit system.

Two calibration methods were compared, namely a heuristic ad hoc method and a nearoptimal method. Both methods were applied to calibrate a crash prediction model using the same set of data from an urban freeway in Ontario, Canada. The calibrated crash prediction models are used to evaluate the safety benefits of a candidate variable speed limit system under three different traffic demand levels (Peak, Near-Peak, and Off-Peak). 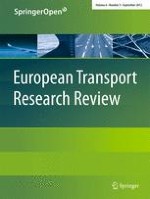 The impact of land use characteristics for sustainable mobility: the case study of Rome

Multicriteria versus Cost Benefit Analysis: a comparative perspective in the assessment of sustainable mobility