An innovative method for separating non-metallic inclusions from a high temperature melt using super gravity was systematically investigated. To explore the separation behavior of inclusion particles with densities less than that of metal liquid under a super-gravity field, a Fe-Al-O melt containing Al2O3 particles was treated with different gravity coefficients. Al2O3 particles migrated rapidly towards the reverse direction of the super gravity and gathered in the upper region of the sample. It was hard to find any inclusion particles with sizes greater than 2 μm in the middle and bottom areas. Additionally, the oxygen content in the middle region of the sample could be reduced to 0.0022 mass pct and the maximum removal rate of the oxygen content reached 61.4 pct. The convection in the melt along the direction of the super gravity was not generated by the super-gravity field, and the fluid velocity in the molten melt consisted only of the rotating tangential velocity. Moreover, the motion behavior of the Al2O3 particles was approximatively determined by Stokes’ law along the direction of super gravity. 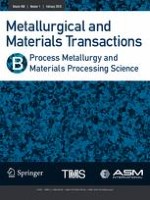