Sequential pattern mining has been introduced by Agrawal and Srikant (in: Proceedings of ICDE’95, pp 3–14, 1995) 2 decades ago, and its usefulness has been widely proved for different mining tasks and application fields such as web usage mining, text mining, bioinformatics, fraud detection and so on. Since 1995, despite numerous optimization proposals, sequential pattern mining remains a costly task that often generates too many patterns. This limit, also reached by itemset mining, was circumvented by pattern sampling. Pattern sampling is a non-exhaustive method for instantly discovering relevant patterns that ensures a good interactivity while providing strong statistical guarantees due to its random nature. Curiously, such an approach investigated for different kinds of patterns including itemsets and subgraphs has not yet been applied to sequential patterns. In this paper, we propose the first method dedicated to sequential pattern sampling. In addition to address sequential data, the originality of our approach is to introduce a class of interestingness measures relying on the norm of the sequence, named norm-based utilities. In particular, it enables to add constraints on the norm of sampled patterns to control the length of the drawn patterns and to avoid the pitfall of the “long tail” where the rarest patterns flood the user. We propose a new two-step random procedure integrating this class of measures, named \({\textsc {NUSSampling}}\) that randomly draws sequential patterns according to frequency weighted by a norm-based utility. We demonstrate that this method performs an exact sampling according to the underlying measure. Moreover, despite the use of rejection sampling, the experimental study shows that \({\textsc {NUSSampling}}\) remains efficient. We especially focus on the interest of norm constraints and exponential decays that help to draw general patterns of the “head”. We also illustrate how to benefit from these sampled patterns to instantly build an associative classifier dedicated to sequences. This classification approach rivals state-of-the-art proposals showing the interest of sequential pattern sampling with norm-based utility. 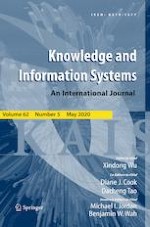 Recurrent random forest for the assessment of popularity in social media